Lots of aspects of commercials sailing have become safer or better prepared for any danger. However, a fire in the ships engine room is still the most severe safety risk. Things can become seriously hot inside an engine room. Particular parts can exceed temperatures exceeding 600 degrees Celsius. These parts must be covered appropriately.

The SOLAS (Safety of Life at Sea) convention, ratified by the IMO, aims to keep ships safe. The renewed SOLAS agreement has several chapters, but in short, it limits how hot the surfaces of specific engine components are allowed to be, to cut the risk of fire. It also defines what kind of spray or splash protection should be used near flammable liquid systems such as the fuel and lubricating oil system. By installing SOLAS solutions on turbochargers, exhaust gas pipes and fuel and oil spray/splash protection, engine room surface temperatures must be kept below 220 degrees Celsius, in line with SOLAS regulations.

In this month’s blog, we will deep dive on how you could stay inline of the SOLAS fire protection regulations.

The International Convention for the Safety of Life at Sea (SOLAS), is the most important maritime treaty concerning maritime safety. The convention has been developed ever since the Titanic disaster in 1912. SOLAS is one of the main protocols of the International Maritime Organization (IMO). The IMO exists since 1958 and creates international standards, and treaty’s making the shipping industry as safe and efficient as possible. SOLAS supervision is handled by the vessel’s flag state (the country of where the ship is registered).

The engine room is a space with a severe chance of fire. The main engine, together with auxiliary parts, can reach temperatures of 250 ˚C or 482 ˚F. Especially the temperature of exhaust gases can be extremely hot. The high temperatures of exhaust gases makes it very important to isolate these channels. The reason for isolation is that even a small drop of oil can cause an engine room fire. It used to be very difficult to find a spot with too less isolation material, but it is easy to find today since the introduction of the thermal imaging camera. With the introduction of the FLIR E6 Infrared Camera with MSX you can visually inspect your engine room and meet up to the latest SOLAS fire protection regulations. 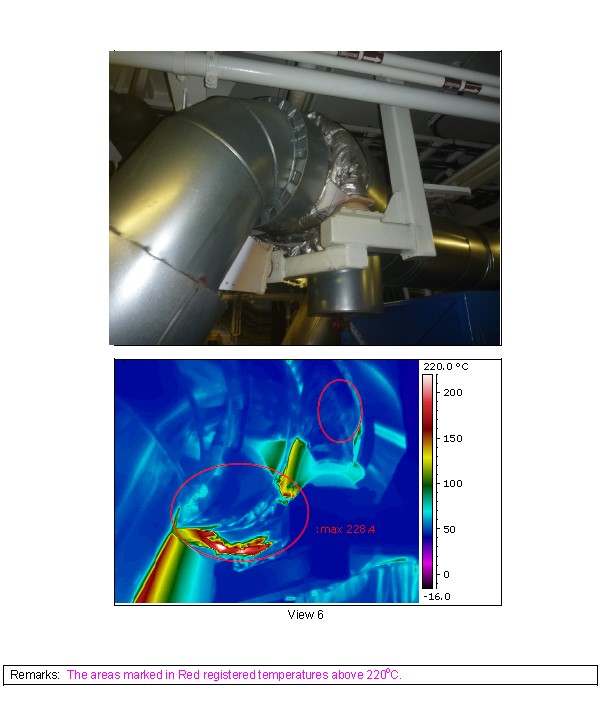 How does a thermal imaging camera works?

FLIR is an American company and the global leader of the production and development of thermal imaging camera’s. FLIR sells its products worldwide to government bodies, the military, commercial- and industrial markets. The FLIR E6 is an affordable thermal inspection tool which complies to SOLAS fire protection rules. With 19.200 pixels (160×120) and a 2% accurate detector, the FLIR E6 will provide you with the best image clarity available.

Optimise your ship’s diesel engine in these 5 simple staps

How to choose the correct flow meter

Alcohol check on board of ships

For all your service questions